On Quora, someone asked:

“Why would a writer waste his or her time on Quora when for $500 on Facebook that same writer can reach about a million people of his or her own choosing?”

This was my response:

I don’t know.  Why would they waste their time on Quora?

Are you asking me why I write on Quora?

Well, I never really intended to.

I always saw myself more as a business man, not as a writer.  I worked at a few start ups here and there, tried to make a few of my own.  I even worked in sales, marketing, at investment funds, real estate investment companies, everything across the board.

I even tried to make a clothing line in December 2012.  By March 2013, my business partner called me crazy and decided to quit.  I was quite discouraged about life.  I had this horrible reputation of failing at everything I tried.  None of my friends talked to me.  I knew a lot of people but everyone just thought I was full of fluff.  I tried this.  I tried that.  Nothing worked out for me.  Hell, I’ve been working at an entry level job at a major corporation without a promotion for the last two and a half years.

Then my friend sent me a link.

So I joined the site in April sometime, let’s say the 10th, because I read this post by James Altucher:  What does it feel like to lose a lot of money quickly?

I thought it was brilliant, so I wanted to read more.  Then I did.

After about a month and five days, I guess I felt like writing a post.  So I did.  On May 15, 2013, I wrote this post: Leonard Kim’s answer to A lot of people want “to be rich” when they grow up. Is this possible? What are realistic ways for one to “become rich”?

I got like 2 or 3 upvotes and 102 views for the month of May, one of them being my friend because I forced him to upvote it.  So I was discouraged and felt that I didn’t want to write anymore.  So I stopped.

Instead of writing, I just perused around the site and upvoted this, upvoted that, read this, read that.  Then someone decided to stumble across my one single answer and promote my post to a thousand people on June 20, 2013.

Because she promoted my one single post, I was encouraged and felt like she believed in me.  So for the next month and five days, I wrote 100 posts by July 25, 2013.

Then I was hooked.  I decided to write about this topic, that topic, and this other topic.  I wrote and wrote and wrote.  In the interim, I made a lot of friends (Whom have told me that I could stay with them for free when I visit their state or country), had an inbox flooded with messages of how I helped other people in their lives, then I picked up two startups to consult and unintentionally raised five figures in seed capital for a business.

How in the world did Leonard raise five figures in seed capital?

It said, “Leonard, hope you’re doing well.  I’ve been coming across your posts on Quora for some time, and just reading them has been fascinating.  So although you don’t know me, I was wondering if you might be in the LA area this coming weekend and would like to meet up sometime over coffee. (Though I work in New York now, I grew up in Cerritos and will be heading home for Thanksgiving!)  Most of all, I’d like to just get a chance to meet you, but a small part of it is I’d like to discuss with you your thoughts on business, entrepreneurship, personal development, etc.”

So I responded, “Wow, I’ve never been asked out on a date before over the internet, let alone by a guy!  Sure, I’ll meet with you!  Don’t get your hopes up though, because I’m not nearly as interesting as you’re making me out to be!”

He then said, “Haha don’t get your hopes up too, I’m not as good looking as I might sound!  Would Saturday afternoon work for you?  I can meet you anywhere in LA, just let me know what works.  Or if you’re in the mood for coming to Cerritos, I understand the shaved ice at Guppy Tea House is quite the fad.”

I decided to change locations to somewhere near me.  That saturday he drove to my apartment.  He picked me up.  We met. We drank boba at a place called Boba Time, like the cool kids in the hood do.  We talked.  Then he decided to put five figures towards the business I’ve been working on building.

How in the world did that work out?

I have absolutely no clue.

By December, I had a three hour meeting with a published author who has a PhD, I had written 1,000 answers and was named a Top Writer, whatever that means.  By midnight on December 31, 2013, I had 2.01 million views on my content.  In the last month, I met with two Angel Investors and an engineer who built software that caught terrorists across the world, whom I spent well over three hours with each on an individual basis, and I was invited to do my first podcast, which can be heard here:  Leonard Kim: Self-Improvement by Jeff Meyerson on The Quoracast

Then last saturday, I was offered my first paid writing gig.

Someone wanted to pay me to write?

Yeah, like that made any sense at all.  I’m not even a good writer.  Do you see where I break my paragraphs?

I just make up a breaking point, because I got C’s in high school English.  I don’t have the slightest clue how to write.

Oh and this week, I was just offered a board position on another startup.  Two nights ago, I was given an invitation to a wedding.  My first wedding ever, how exciting is that!? 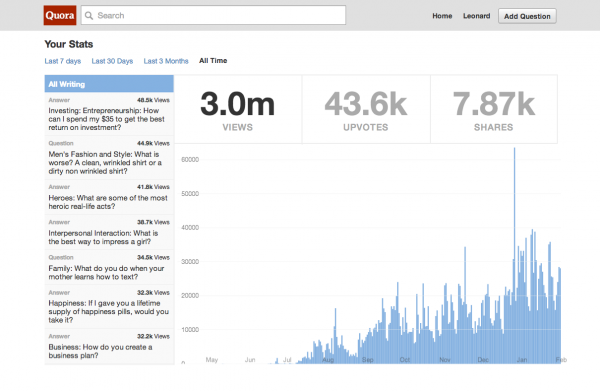 So, let’s go to where I was before Quora and where I am today.

Before Quora:  Leonard was a joke who failed at everything in life.  He had a reputation that made women run for the woods, because no one wanted to be seen around him.

After Quora:  Leonard rebuilt his reputation and changed out his network with graduates of Ivy League colleges, business professionals, Angel Investors, startup founders, and the most brilliant people in the world.  Oh, he ended up raising money and paid gigs too.

Wait, I can’t forget to mention the new haters and conspiracy theorists in this post, can I?

I guess all that time and effort I “wasted” on Quora, doing something which I thought was fun and entertaining, kind of paid off…

Now, let’s go over the statistics of what I was able to create with zero dollars:

But then again, I never considered myself a writer, nor do I today, so what in the world do I know?

Now, what would be really amazing though would be to find an amazing programmer/engineer to work with on this site.  Still waiting for that to happen.  ;]
—

Leonard saved that $500 and used it to create his book, The Etiquette of Social Media: How to Connect and Respond to Others in the World of Social Media

What Is the Most Subtle Question You Can Ask Someone That Is the Biggest Tell of Their Character?

What Are the Experiences in Life That Touch the Heart?