Last Friday, I was overwhelmed from life. It was my first week of school and I was juggling full time work, being a full time student, my time on Quora, and setting up the infrastructure for a business. I went from doing 60 hour weeks to committing myself to around 90-100 hours a week of responsibility, basically overnight.

While I was at work being a brain dead zombie, I decided that it was time for me to make a decision. So I made one.

I wanted to drink.

I wanted to get drunk and forget it all.

I asked my coworker if he wanted to go with me. Like more than once. Kind of saying I’m lonely and I need friends to play with. He sensed my loneliness, followed by desperation, and said he was busy. So I just kind of shrugged it off. Then work ended.

I took the bus home.

On the bus, I asked my other friend if she wanted to go out, get drunk, then make bad decisions that we’ll regret.

Somehow, to my shock, she agreed! No one ever agrees to go anywhere with me.

So we walked over to my place, I introduced her to my mommy, who said she was pretty, then we took the car out.

As I parked, she placed her purse in my trunk. Then we headed over to a restaurant. The greeter said they were fully booked, so I pulled out a wad of cash and asked if I could be seated now. He said it didn’t work that way, so I put my name down and asked for them to text me when a table was available. They said it would be an hour. I agreed.

Since we had an hour to kill, we went over to a bar down the street. We each had three drinks within the time span. She had two mixed drinks and a shot. I had two glasses of scotch and a shot.

Then we went for dinner. There’s this new place in KoreaTown called EMC Seafood & Raw Bar. They have amazing seafood. So when we arrived, we were seated next to the ice box that holds all the cute little animals. 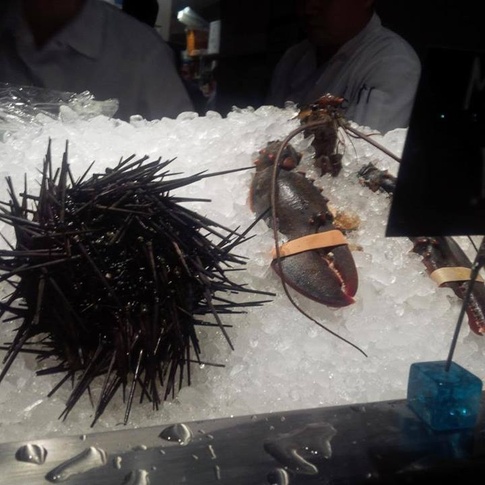 We wanted oysters, so we started with a dozen, from all around the world, then followed it up with a bottle of wine. Please, don’t ask me what kind it was, I’m no connoisseur. All I can say is that it was white and it paired quite well with our oysters. 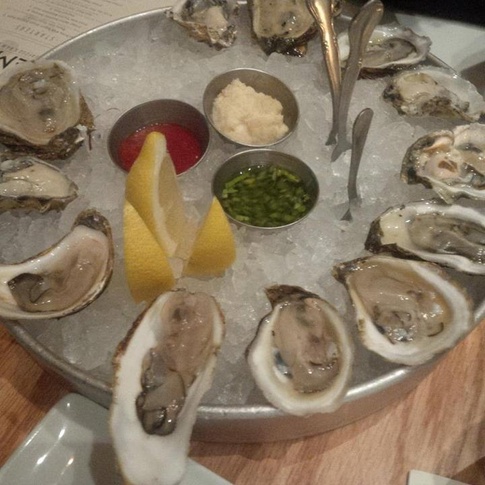 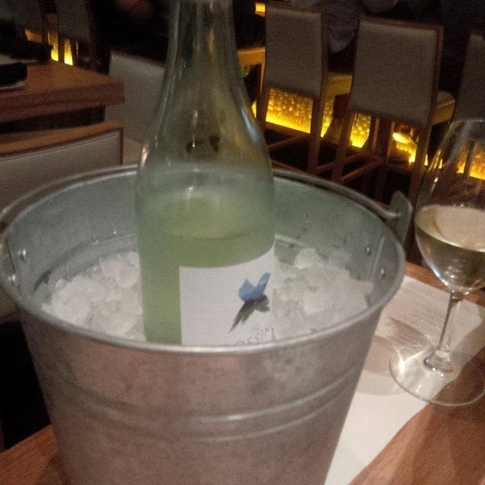 As we ate, our hunger grew. We ordered Uni, then followed it up with our friend, Mr. Lobster, who we kept eyeing throughout our whole dinner. Snap snap! Whee!!! 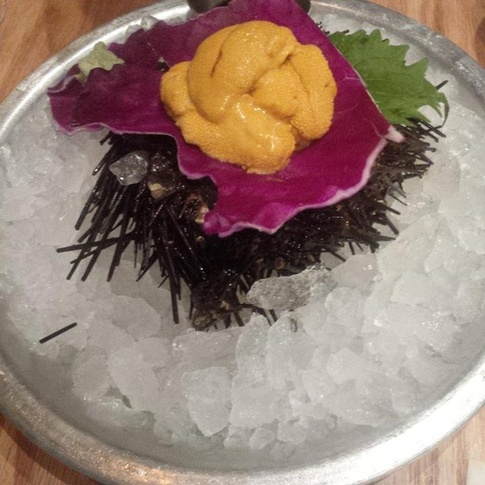 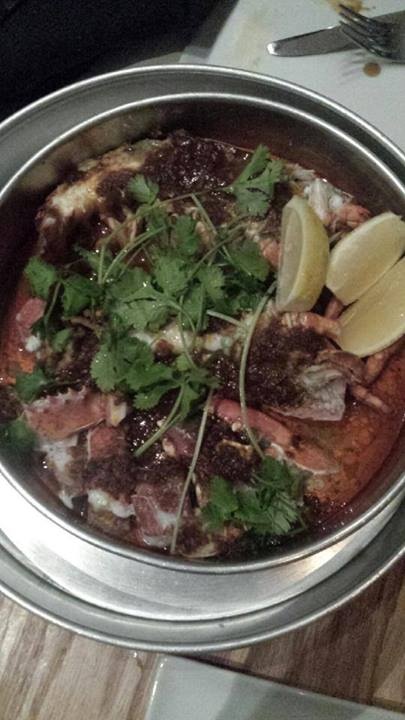 Then the bill came. I paid and dumped a ton of $2 bills everywhere as tip. I made it rain!

After dinner, we decided to go across the street to this other bar. We both had a glass of alcohol each. I had scotch and I don’t have the slightest clue what she ordered. Then it was her turn to decide what to do. She made a decision. She wanted to sing.

So away we went. We once again crossed the street to end up at the Karaoke venue. (Yes, all four of these places are literally one block away from each other. That’s just how congested Koreatown is.) I ordered a bottle of Soju as we sang the night away.

I don’t know how she didn’t go deaf, especially with the horrid sounds that come out of my mouth as I sing, that do not sound harmonic in any way whatsoever. However, we sang away. I think I even warned her beforehand, saying that I sing horribly and the only way for her to get me to shut up would be to toss all her clothes off at me. Well, anyways…

Back to the point. With society nowadays, it’s kind of acceptable to make a move on a girl that you have fun and get drunk with. Whether things work out or not, you’re able to both move on with your lives and still enjoy each other’s company. Or at least that’s what I’ve come to find, living in Los Angeles. I mean, I’m definitely not an expert on dating. I’m probably the worst person to ask any type of dating question whatsoever. So I suppose you can tell me if that philosophy is flawed.

Well, I wish that’s what I did in this situation. However, I did something far worse.  I probably did the worst thing that I ever could do, to anyone.  I still feel like such a horrible person for doing this.  I’ve been beating myself up all week and thinking of how stupid I am.  I’ve called myself a horrible person and a piece of s*** at least a dozen times a day hence.

So, at some point in the night… I blacked out.

When I awoke in the morning, I realized that I was in my bed.  I had no clue how I got there.  So, I did what I normally do.  I checked my phone.

I saw that I had a few text messages.  So, I decided to read them.

The first one said, “I need my keys to my apartment.  Where are you?!”

The fourth one said, “Please drop off my bag tomorrow.  A**hole.”

I decided I should listen to the voicemail.  It said, “Hey, my keys are in my bag, which are in your car, and you like literally just f***ing left me like I swear to God I’m never f***ing hanging out with you again.  I swear, oh my God, how can you just leave me?  How am I going to get into my apartment without my keys, like you just left me and I’m standing here looking for you and I cannot find you anywhere. Like, oh my God how f***ing thoughtless, like what kind of man are you?  I’m so f***ing pissed off right now I can’t even express it, like oh my God, bye.”

So, I pieced together what happened the night before.  The last thing I personally remembered doing was singing a song with her.

I felt that I needed to respond to her texts.  I said, “Yes. I will pay for that.  I honestly do not remember leaving.  I have no clue how I got home. I blacked out.  I’m sorry.  I am an a**hole.  I will return your bag with money.  Did I take you home? When I see you later today to drop off your bag, you are more than welcome to slap me.  Or even punch me.  I’m genuinely sorry.”

Well, I just feel really bad about the whole situation, but I think I know what happened.

Back when I was injured, last year February, my body went through an excruciating amount of pain.  I really don’t remember when I cried more, when my ex left me or when I was in the hospital from the injury.  Regardless, I think some fear signals were buried deep into my subconscious.

I think my body gets scared that I’m going to injure myself in some way when I get that intoxicated, then my body goes into defense mode and forces me to go home and into bed, where I’m safe and sound.

I’m under the impression that this is what happened, when my mind shut off.  I forgot all about my surroundings, all about my responsibilities, and my body went into survival, or preservation mode.  My body felt the need to protect itself, and my social life suffered drastically as a consequence.

Originally, all we wanted to do was go out and make bad decisions that we could regret.  In the end, I spent well over $300, and the only one who made a decision that they regret was me.

Who in the world leaves a girl stranded at midnight?

I’m by far the worst person in the world…

0 thoughts on “The Night That Seemed like a Good Idea at First, But I Now Regret”