Earlier this year, I went to the Chick-Fil-A in Long Beach one day. I love Chick-Fil-A. They made me love a food that I didn’t really like too much, cheekan! They have this Spicy Chicken Sandwich, absolutely amazing…

So, I ordered a meal and while I was eating, a girl who worked there had walked over to our table and told us of their anniversary party they were having in two weeks. I continued to chew while she talked, then it hit me. She said PARTY.

After a delayed reaction, I finally turned to her, looked up, and said, “PARTY!?!?!?”

With excitement, I asked… “IS THERE FREE FOOD?”

She said, “Yes, we will have an eating contest and Medieval Times is coming too!”

She said, “Yes, and there will be this and that.”

I then turned to my friend and said, “THOMAS, WE HAVE TO GO HERE IN TWO WEEKS!!! NO QUESTIONS ASKED!!!”

So, for the next two weeks, I told all my friends about this. Everyone I could even talk to, I told them about how Chick-Fil-A was having a party. I’m probably the worst person to promote a party or event in the world, because after all my promotion of the event, because when the day for the event came, I had ONE friend join me, David Mack.

Anticipating the day, we had prepared. We had emptied our stomachs and prepared for a lavish day full of our favorite savory chicken sandwiches. We were quite excited!

So, when the day arrived, I picked David up and we went down to Chick-Fil-A in Long Beach, even though it’s about 25 miles from where I live. When we arrived, there was a bouncy ball pit, a little photo area with a medieval time person, and no free food. So, we entered into the building and inquired about the eating contest. 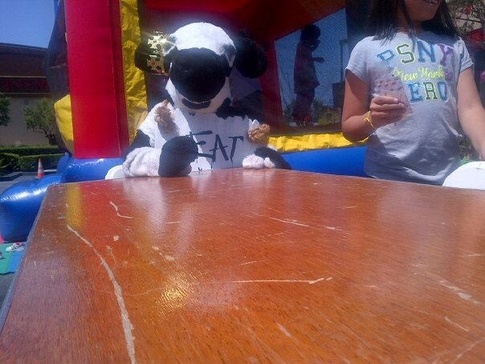 They had told us that they would be doing the contest at noon, so we enrolled. I went outside and danced with the cow for a bit, because the cow is freaking awesome! Oh, and I chatted with the Medieval times guy for a while, because… You know, he’s really cool! 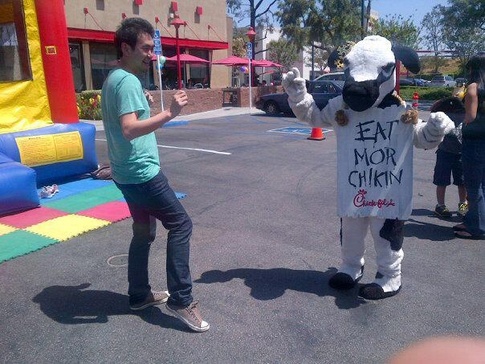 When the time came for the eating contest, we could tell that the event wasn’t marketed that well. The only people who had shown up were parents with their little children, and us. David, me, and a bunch of kids in elementary school.

Did that stop us from competing in the eating contest? Absolutely not! We had sought out and prepared to be gluttonous pigs on this day and we were not going to let our shame or pride get in the way of us accomplishing such a feat!

Prior to the contest, one of our competitors, probably in fifth grade had came up to talk to David. She had talked to him about how she really wanted to win the contest. David felt bad for her, because (His words, not mine) her parents decided to name her a stripper name, Destiny. So, he agreed to give her the prize, no matter what it was, in case he won. She was happy.

Then we were called over to compete. We had three minutes to eat as many spicy chicken sandwiches as possible! We ate and we ate and we ate away. We took big bites and did the least amount of chewing, however the spiciness of the sandwiches made us pause for breaths. As we continued, all the kids had dropped out of the race. It was just me and David, going head to head. We were both on our second sandwich, which we had finished, yet the timer hit.

It was a draw!

So, we went into overtime. We were both given one more sandwich, and whoever was to eat it first would be the winner. Ultimately, David won by three bites. He jumped up in excitement. He had won four free tickets to the Pirates Dinner Adventure Show in Buena Park. As promised, he gave his prize to Destiny.

Then, we were thirsty, so we went inside to get some Lemonades. Chick-Fil-A has amazing lemonade. Surprisingly, we were given more free coupons for free food for making a purchase. Overall, the day was amazing!

Overly confident of our feat of beating little children in an eating contest, David and I had sought out a real contest to compete in.

A few weeks later, we entered into a 54 inch pizza eating contest at Big Mama’s and Papa’s Pizzeria in the valley with a team of people who owned a Pest Control business. We went head to head with a bunch of realtors…

0 thoughts on “What Does It Feel like to Be in an Eating Contest?”