I know exactly what you’re thinking!

Who in the world, who is 21 years old, drives a Buick Century?

Well, let me help answer that question for you.

My mom made me buy the car under my name before she abandoned me and went off to Hawaii.

So, while we were together, my ex and I, we had decided that it would be in our best interest to live together. So we did.

Then, one random day, she had called me at nightfall. She was stuck, stranded on the side of the freeway, as she had a flat.

She gave me directions on how to arrive to where she was, and I decided that I would take some time to go figure out where to locate her. When I had arrived, I saw that she was on one of those center dividers on the 110 freeway, in between the 10 and 101 freeways, where the lanes split between the downtown exits.

(Red Circle indicates where she pulled over.) 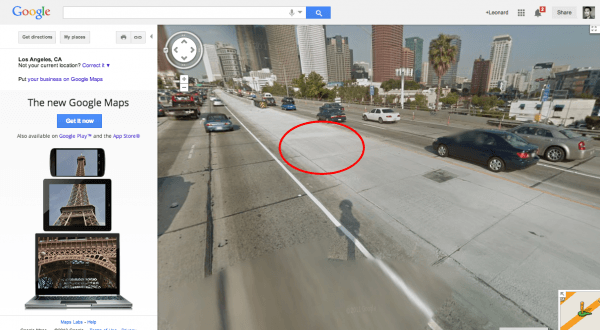 The first thing that went through my head was, who in the world pulls over on these little things in the middle of the freeway?

Whatever. So I decided to pull off over to the side somewhere. I got out of my car, I saw that vehicles were moving like 80mph, and I decided that I had to run from the side of the freeway to this middle section to get to her vehicle.

Yeah Leonard, smart move genius. Whoever says I have a high IQ or thinks I’m smart will take back any statement like that after reading this story. I’m certain of it.

Well, I ran over to her vehicle. Her car was very close to the edge, where trucks and other vehicles were just a matter of feet, if that, from hitting her car and destroying it to oblivion. Regardless, I decided that I would pop open her trunk, pull out her jack, and change the tire.

So, while I was lifting up her car on the jack, I decided to take off the lug nuts on the tire. I took off about four of the five of them, and then, all of a sudden, the jack fell from underneath the car. My hand was stuck in between the tire and the metal from the vehicle was digging straight into my hand. I screamed in agony and I looked at the freeway and watched about twenty trucks, inches away from running me over and pulverizing me into tiny little pieces of road kill.

I yelled at her to run to my vehicle and get the jack out of car. She did. Somehow, I figured out how to lift the vehicle up, probably with her help, and freed myself from the traps of hell. Then I continued with removing the tire and changing out the flat.

After that was done, I had looked at my hand. It was so unusual… I saw something… White… I wondered what it was… Then I realized… I could see bone! The car had cut my hand so bad, that I could actually see the bone from my finger! Actually, my finger was almost chopped off completely! It was freaky, yet cool.

Being an idiot, and not having a clue what to do, we just drove home. After we arrived, I went to bed, with this piece of bone showing from my hand. The next day, I decided to go to work. After about two hours of being there, I realized that it would probably be in my best interest to go to an urgent care location, due to the recommendations of my coworkers, so I did.

I was stuck in some stint or something for about a month. Then, I recovered. Now, i’m permanently left with a scar over my right ring finger. A ring to always remind me, that whenever I need to change a tire in the future, to always call AAA.

0 thoughts on “What Is the Most Dangerous Thing You’ve Done in a Relationship?”