I was a saleswoman at a big car dealership for nearly two years. It was one of the worst jobs I’ve had in my entire life. In the summer of 2014, one of my friends, Archibald, came to me to buy a car. He was in the process of getting a new job as a driver, so he needed to have a newer car. He came to me because he trusted me.

After spending several hours with Archibald at the dealership, I came to understand his financial situation. He didn’t have a lot of money and his future driving job wasn’t going to be very lucrative either. His credit was not very good. He was just barely able to pay his bills, even without a car payment.

Archibald and I spent the entire day hashing out the possibilities and by the end, he agreed to buy an older, used Prius from me. I didn’t have access to the profit margin database for our vehicle inventory. Only managers could see the invoice amount on any car at our dealership.

While my manager was looking at the Prius prices in his computer he said, “Holy shit. Someone really screwed up and priced this car too low!” This meant that there was no room for negotiating and that my friend would not be getting any sort of discount on this car. I told Archibald the news, and he seemed surprised as well. But, since I was his friend, he didn’t question anything. He believed me completely. We worked the deal with the understanding that I couldn’t get the price lowered and we got him approved by the banks and finalized everything that evening. Later on as he was driving away in his newly purchased car, I had a feeling of satisfaction. I felt that I had really done him a favor since his credit wasn’t good and we were able to get him approved by the banks without too much hassle.

The day after Archibald bought his car, I opened up his financial account to find out what amount of commission I’d made on him. I figured it would be a “mini”. A “mini” is a set amount, usually $100, that is given to a salesperson when the profit amount on a car deal is either low or negative. Yes, car dealership do, in fact, lose money on some car deals. 30% of car deals do not make any profit.

My jaw dropped when I looked the numbers. The dealership made over $4,000 of profit on the sale of that car and over $2,000 in profit on extended warranties. I was shocked! How did we make over $4000 when my manager told me that the car was priced too low? My manager’s dramatic response when he first looked at the “super low price” seemed so realistic, so believable. Was there an accounting error in Archibald’s file? Or did my manager just put on a really good acting show when he told me that the car was priced too low? I was totally confused, bewildered. I felt cheated! My manager lied to me, which then caused me to lie to my friend. Technically, I never lied to my friend because I thought I was telling him the truth. My manager took advantage of both me and my friend! What a scoundrel. Welcome to the car dealership.

To be honest, I would have rather given my friend a $2000 discount in order to lower his monthly payment, and I’d be content with the dealership making $2000. If I had known that we had this much room on the deal, it would have turned out very differently, with my friend’s monthly payment being reduced quite a bit. My managers were all liars.

I enjoyed making decent money at my job but I do possess a sense of right and wrong. I was an honest person. I would always go out of my way to get a good deal for a friend. I would never intentionally rip off a friend. That was something that just didn’t feel right. I still feel really shitty about unintentionally ripping off my friend Archibald. He came to me because he trusted me. I can never tell him the truth.

I talked with Archibald just the other day. He told me he was recently in a bad car accident and his Prius that I sold him had been totalled. He had purchased Gap insurance, so the entire car loan had been paid off by the insurance company and my dealership. He said he was relieved that he no longer had a car payment. He also said he was quitting his driver job so he no longer needed a car. He wasn’t going to replace his Prius. He said he was glad he had come out of the bad situation free and clear.

I was relieved to hear this news but I never told him the truth. Maybe I will tell him someday. 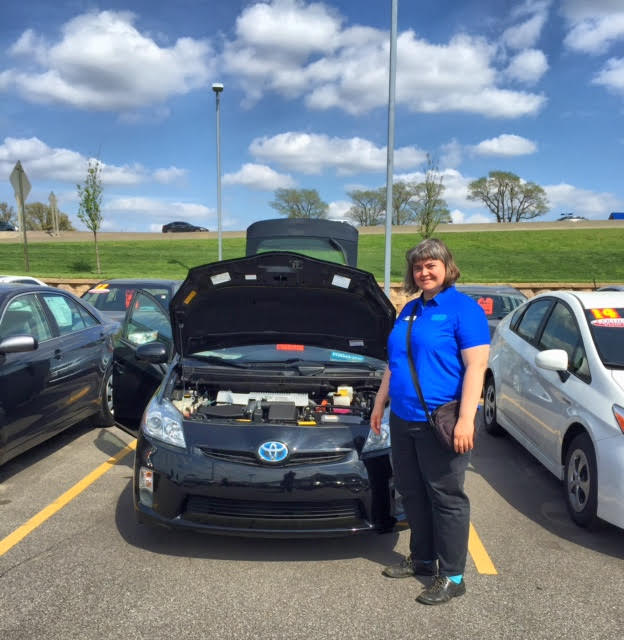 Stellabelle is an artist, writer, experimenter and YouTuber.

Her main passion is creative experimentation. She received her B. A. in Japanese from the University of Kansas in 1994. She has lived in Kansas City, Chicago, Tucson, Tokyo and San Diego. She is about to release her first self-published book, Un-Crap Your Life.

Sign up for her newsletter to receive release dates and other cool stuff:
https://leahstephens.weebly.com/sign-up-for-my-newsletter.html